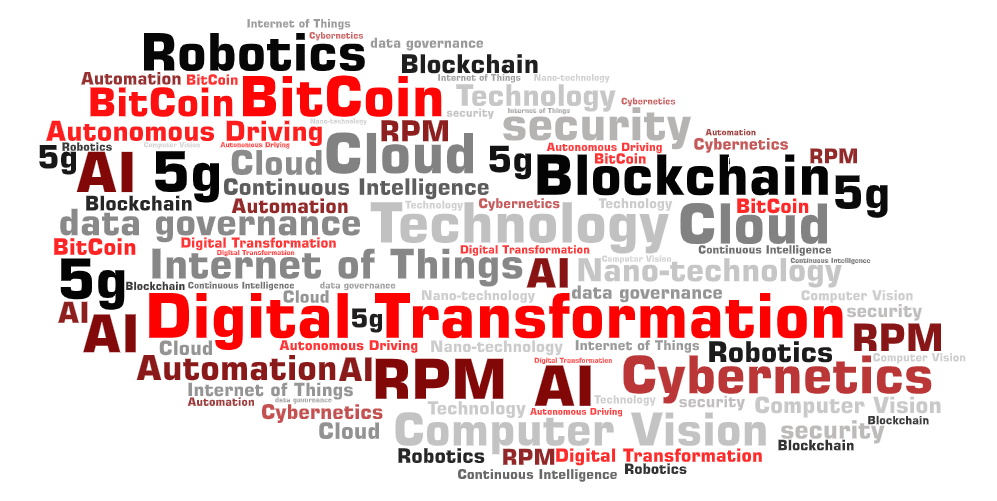 Digital transformation has been a buzzword for many years and use of the term is increasing. Even with that fact, you’d be hard pressed to find one concise definition of what exactly it encompasses. In short, digital transformation is nothing but altering the way a company works, and keep up with the new digital landscape, often adopting new digital means to run business operations more effectively.

Now that we’re in 2020, new buzzwords are awaiting to make their way into a variety of Forbes articles, and then trickle down into your weekly meetings. Chances are you’ve already heard a couple of them! With significant themes like Robotic Processing and Artificial Intelligence, these phrases will be popping up in many industries. With technology advancing as quickly as it does, our vernacular surrounding the processes and trends changes rapidly, which leads us to new buzzwords every few years.

When we think of the current digital landscape, we need to also consider what came before. Some of us may remember fabled computers taking up entire rooms, but these were the foundation for what our current technological advancements are laid upon. In the past we kept records with physical, paper files but we have now progressed to content management systems, and systems that allow us to consolidate files and maintain security measures. These are all examples of a changing technological world, and the wording that needs to change along with it.

The sure winner of the gold medal in this buzzword Olympics is Computer Vision. As an offshoot of Artificial Intelligence, Computer Vision makes its way by making an abstract technology more concrete with the inclusion of a sensory perception very basic to our everyday function. It is the next step of evolution in computing technology and going to move technology one step further.

Essentially, computing devices and programs would be able to extract data from visual inputs. The very idea is founded upon the very idea that digital devices can replicate doing of humankind with even more unprecedented outcomes that enable computer to ‘see’ data and then supply higher-level information and analytics. IT is the next step of evolution that started with the concept of facial recognition. The most important point of this buzzword is its ability to be used across languages, and its ability to work without the need for human organized data. No longer will a picture of a dog, mistakenly labeled kittens, end up in your feline folder.

Coming in with a respectable silver medal is the term ‘Internet of Things’ (IoT). Internet of Things is a catchy and very ambiguous phrase. With the wealth of everyday items connected to the internet, creating collective information processing mechanism in the cyberspace, in an average human’s life; IoT only makes interactive bridge between humans and machines. The greater internet influences in a way that demands that interfaces be able to transmit and understand data from other platforms, even if they seemingly shouldn’t interact.

The major shift will come from designers needing to create endpoints where these devices interact. While many companies predict IoT taking up to 11% of the economy by 2025, the main impediment is the issue regarding internet connectivity and making it readily accessible across connected platforms. We may end up seeing IoT’ bubbles’ around major companies, smart homes, or business centers and in a word every ‘where’. We may also see the rise in the buzzword ‘multi-experience’ because of machine learning and the newer avenues of connectivity that IoT will make possible.

And rounding out our top three with a bronze medal is the tried-and-true Blockchain. 2017 was a monumental year for Blockchain and Bitcoin with major financial upheavals, and it’s looking like 2020 might be the year of resurgence. With many economic experts predicting a recession, it makes sense for people to turn to Bitcoin.

First, let’s have an idea why the term Bitcoin was so revolutionary since inception. Bitcoin was (and is) a type of currency that existed without a central, and without needing exchange rates based on location. This was important because it was easier to understand for many consumers and allowed people in countries with high inflation to still succeed in this digital area by utilizing the relative stability of crypto currency. Blockchain is essentially governance for this industry. It allows Bitcoin users to use the currency without fear of ‘counterfeit’ Bitcoin and being able to track what’s happening to their currency.

Because of this, seemingly infallible recorder keeper, we see Bitcoin and other digital currencies being used more and more in large businesses and by many countries facing international embargo. This shift seems likely to continue into 2020 to act as security because of economic change and to level the playing field worldwide. Not a bad buzzword to come in 3rd!

There you have it, folks! Which buzzword do you think will impact your industry the most? The amazing thing about digital change, is that eventually, it will touch every part of our lives- whether we like it or not. I’m intrigued to see how Blockchain expands in the coming decade.

This website uses cookies to improve your experience while you navigate through the website. Out of these cookies, the cookies that are categorized as necessary are stored on your browser as they are essential for the working of basic functionalities of the website. We also use third-party cookies that help us analyze and understand how you use this website. These cookies will be stored in your browser only with your consent. You also have the option to opt-out of these cookies. But opting out of some of these cookies may have an effect on your browsing experience.
Necessary Always Enabled
Necessary cookies are absolutely essential for the website to function properly. This category only includes cookies that ensures basic functionalities and security features of the website. These cookies do not store any personal information.
Non-necessary
Any cookies that may not be particularly necessary for the website to function and is used specifically to collect user personal data via analytics, ads, other embedded contents are termed as non-necessary cookies. It is mandatory to procure user consent prior to running these cookies on your website.
SAVE & ACCEPT